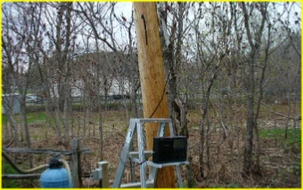 If you are a low frequency enthusiast as I am and you have enough room, you could elect this classic and reliable design. If it is terminated; the longer you can get, narrower the main beam towards your listening target will be. Besides its benefits, it is also a great way to stay in shape! Personally, I do maintain them at least a dozen times a year, clearing branches and small trees that keep falling regularly over the wires.

Testing at feed point my first ever Beverage with my former DX-392 portable. This is the wire aimed to Africa (going to the right).

Here in Eastern Canada, due to regular harsh weather, especially during our Winter,  a strong wire was mandatory. Thanks to various resources on the Internet, I found that the obvious choice for me would be electric fence wire. First because it is very solid and durable, even under ice or physical ill treatment conditions. Second, it is easily available and cheap. I paid around $35 CDN for a near 1200 foot roll. I have been using this type of wire quite successfully so far the last ten years or so. However, it does break occasionally because of bigger trees falling over it. For repairs, I use stainless steel bolts with nuts and washers (¼ inch diameter) to joint the two wires. Then I cover the joint with Vaseline in order to avoid premature oxidation. Both European Beverages have a snowmobile trail passing beneath. Over that span, the wire goes trough short plastic tubes, each literally inserted at the top of each cedar pole. Besides isolating the wire form touching the wooden pole, it  is well secured from any accidental fall.

I run my wires at nearly 8ft (2,5m) high making sure that deers and humans won't damage them, neither hurt themselves. I'm using for the most part of the run, trees as natural supports. The soil around here is mixed with sand and can be very wet at times. In the St-Lawrence valley, we receive our  good amount of precipitations annually. I won’t mention enough how fortunate I am being able to erect such large antennas towards my favourite listening target. For Latin America which is another point of interest, being directional, I would have to cross the street with my Beverage. Alternatively, I'm using an unterminated wire who's SW direction is rather pointing at Mexico and the South Pacific Ocean. Not too perfect for South America but with appropriated propagation, it does reveal something interesting once i n a while.

My typical termination post made of treated wood. As for the termination resistor, I use a 470 ohms, 2W non-inductive ceramic composition resistor capable of handling voltage surges. It came with the DX Engineering  BFS-1 package and it likely is this Ohmite OY471KE resistor (PDF), or a close equivalent. The antenna wire is tethered to that tree behind through an isolator (African wire termination shown) 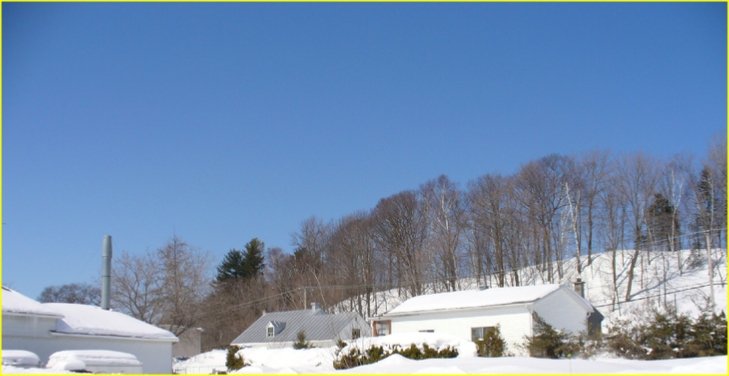 View of the African Beverage run alongside the slope

You might find that most of my “work” on Beverage antennas was largely inspired by Tom Rauch, W8JI and his excellent page about Beverage antenna construction. You'll also find more on the topic at the dedicated Hard-Core DX antenna page. Here's another technical article about Beverages basic principles and practical tips, in French from André Ducros, F5AD. 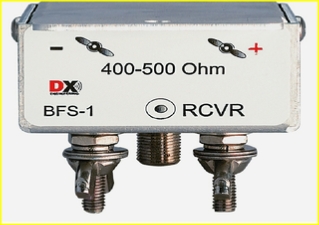 On a Earth great circle view , please have a look at my Beverages map (PDF) centred around Quebec City, which is near to my location. Note that the extended 28°-208° goes for Winter at 35° directional This bearing is estimated because in practice, I couldn't maintain that 28° straight line at such antenna length.

SEASONAL SUMMER BEVERAGE (end of May until early Sept): 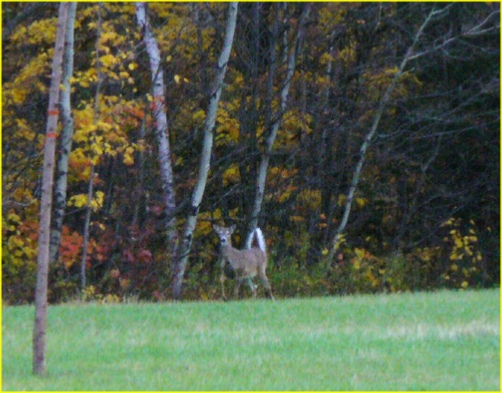 While doing some Beverage work, I had a kind local observer. I could approach it at a near 40m until it escaped into the forest. It was probably wondering what in the hell I was doing!

When German dxer Jürgen Bartels wrote me about his ability of remotely switch on & off the termination resistor of his Beverages and this, without the need of a return wire but by using earth as a returning path, I was puzzled. Initially, I thought that it unconditionally need a certain amount of AC voltage to obtain conduction that way but I was told that I could also get the same result by using DC!  Despite explanations and for a while, it was still darkness in my head... Jürgen is using AC square wave generated from an homebrew circuit and fed by the RS232 port of his computer. This is sent through the feedline coax in order to trigger his termination circuitry. See the details on the "remote switched R" page from his website. 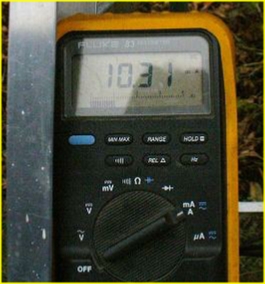 In my case, as I already have an existing circuit to switch my Beverages, I just wanted to adapt Jürgen's design to my actual gear. He told me  that only a short pulse of DC voltage was enough to toggle the latch relay of the remote circuitry (on which I end up learning along the way). I then decided to order three of those in order to  perform some test. Under Jürgen's advice, I had to determine first which amount of DC voltage that has to be applied to make the relay "latch". To do so, I placed an ammeter in series while applying directly a variable DC voltage to the Beverage. I needed to get a read of 10 mA on the meter which is the threshold current needed to excite the relay coil. Interestingly, the voltage is travelling throughout the Beverage, all the way up to the 470 ohms termination 445m away, and it returns through the soil to complete the circuit. See the ammeter picture on the right showing a 10.31mA read. 26V was needed to reach this level. Now to make the latching relay toggle, a dual polarity voltage is mandatory and has to be injected alternately to it.

I made a dual version allowing me to control two Beverage terminations separately. With a momentary toggle switch in shack for each Beverage, it commutes alternately between +26V and -26V to be sent through each wire and switch On or Off the termination resistor at the far end. When I push the button, it initiates a 3 steps’ sequence I would describe as follow:

1) It disconnects the Beverage from the matching transformer for 0.67 sec

3) It connects back the Beverage to the matching transformer after 0.67 sec

The time delay values are more or less arbitrary. Those were determined by the components I had on hand. The basic rule is that step 1 has to be a bit longer than step 2 and in my opinion, it shouldn't exceed 1 second. Listen to this demo with WBBR while switching remotely the termination resistor on & off. The antenna was the 450m 35-215° wire. The strongest signal indicates that the resistor is disconnected. Now, here’s another demo on 900 KHz this time featuring both CHML and Radio Progreso (SW-S). When opening the termination, Cuba comes in fairly well but with the termination resistor connected, the back lobe of the Beverage is literally shrunk leaving only Hamilton in the clear. 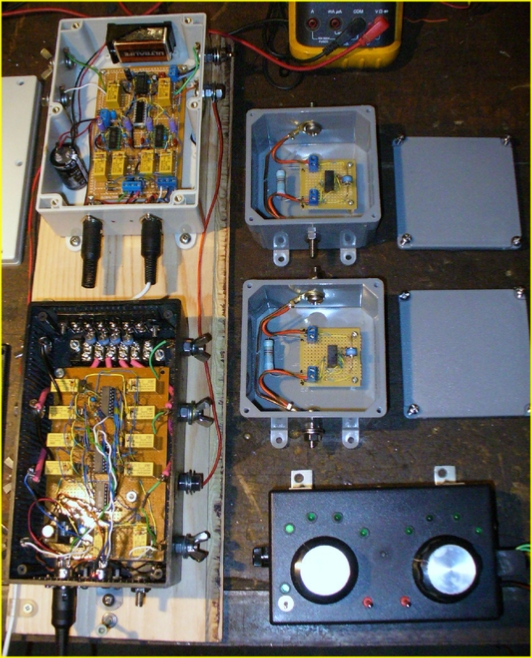 Looking at the above photo, on top left, there is the dual Beverage voltage injector (as I would call it). Then on bottom left, there is the Beverage wire switcher and on bottom right, there is the in-shack controller where you can see the two red toggle switches that have been added lately in order to control the two Beverage termination remote circuits (shown top right), this inspired from Jürgen's remote controlled termination design. For good measure, I've added a 90v gas discharge tube and a spark gap, both connected between antenna and ground in order to protect the diodes at least (if it really does, hi). 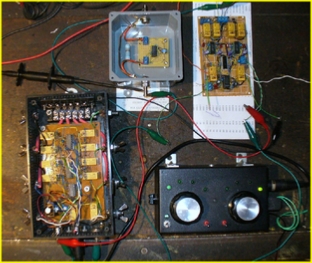 Based on this data, I ended designing a circuit that could execute this task within my existing antenna switching gear. I first did some tries with a test termination circuit and then, for real on the field.  What a joy when practice matched the theory. Indeed, as I was standing at the far end of the Beverage and telling my wife on the cell phone to apply the voltage and then reverse it, I heard the "click-click" sound coming out from the relay board! Now I was really ready to move forward with the design. The circuit should now be triggered remotely using the existing Beverage switcher. The basics are quite simple: By using LM556 dual timers, Flip-Flop devices and relays, it creates a timed sequence which disable the matching transformer from the Beverage and within this short period, a DC voltage pulse is sent throughout the Beverage. This gave the circuit you can see upper right on the left picture while in test. 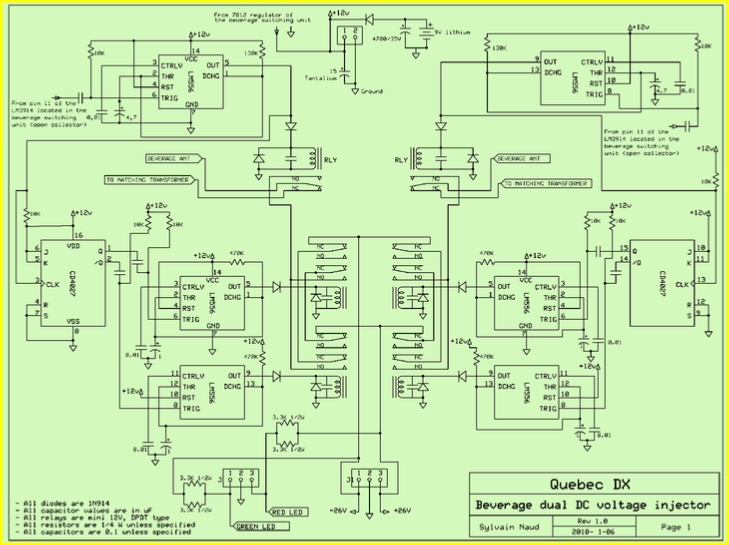 Dual polarity power supply. No need to add regulation here. This very basic version does a perfect job in making the relay toggle

Complete injector circuit. It is a kind of a "personal" version since I designed it to fit my existing Beverage switcher. It gives you however a general idea of the concept 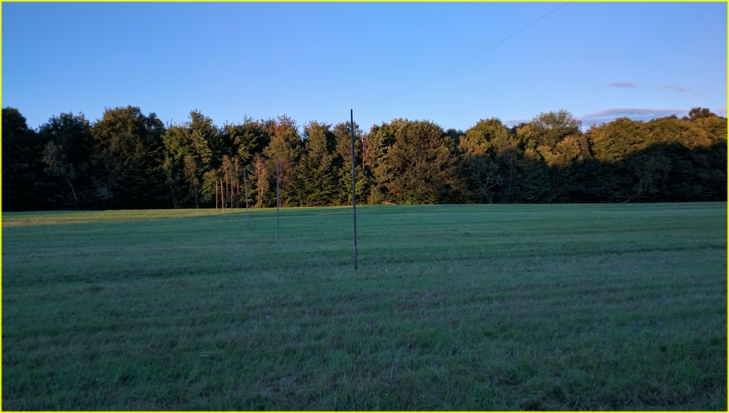 Sight of the 55 degrees “European-Middle Eastern” Beverage antenna, there crossing the hay field after being recently erected and ready for the upcoming MWDX season. You probably have already guessed that it ends farther in the forest. Its total length is 290m / 950ft.