Above, a general view of my shack receiving equipments. Along with the Perseus SDR, there is the ICOM IC-R75  (bottom left) now acting as a backup receiver. For its price range (around $600 USD), it sure remains one of the best value on the market. In mine, two more filters were added. According to my needs, I elected a 1,9 MHz narrow filter for the 9 MHz IF (FL-223) and a 3,3 MHz wide filter to fit the 455 KHz IF (FL-257). It also has the Kiwa Sync-AM installed. It is no secret that the R75 stock sync-am is almost non-working. Fortunately  over the years, solutions have been developed to make this mode work properly. In the US, Kiwa Electronics have their own  Sync-AM module for this receiver. And guess what? I did send mine to have this mod performed. It is still working nicely and sounds really good, especially when listening to shortwave. 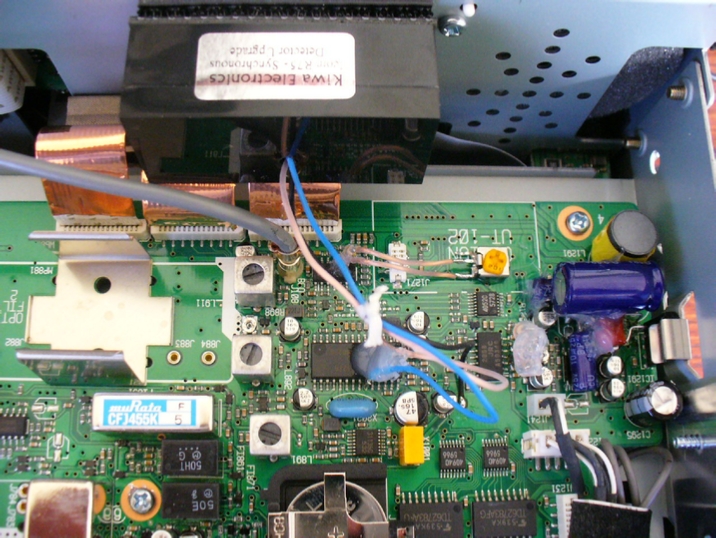 A view of the Kiwa S-AM module installed inside my receiver. On the upper right, the audio mod is represented by the glued capacitor pile and next to it, the ECSS mod by the yellow trimmer. This photo was taken before adding optional filters.

While sending the unit to Kiwa, I took the opportunity to have other mods performed. Among ICOM HF products owners, it is also well known that a 1,8 MHz high-pass filter is part of the receiving section. For LF and MW listening, it is better to avoid this stage to get the maximum gain through your ears. The idea thus is to remove the attenuation circuit. Kiwa did the job for me. I didn't felt comfortable in doing micro-electronics work and I wouldn't take any chances to damage this delicate circuitry. Craig also offers an audio mod to improve clarity. This was done by changing a couple of capacitors for higher quality one. I also asked him a special favour. While DXing, I mainly use the "ECSS" mode. On the R75 Yahoo group, there's a simple mod (see your browser’s download tab) to increase audio in SSB. He did that job for an extra $10.00 USD. 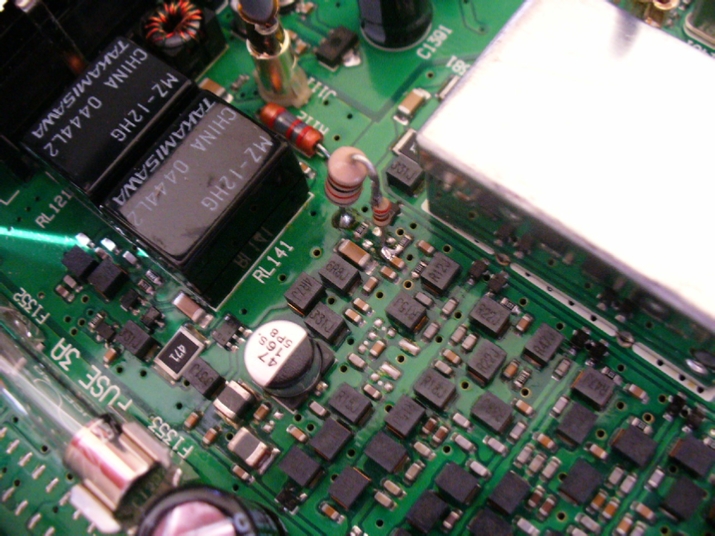 Attenuation combo removal mod shown in the middle by the standing  up inductor-resistor duo. Signals  bellow 1,8 MHz should be rising now by an additional +/- 3db

Since I own this receiver, I’ve got very good results with DX including both longwave and mediumwave, even before the mods and filter addition. Since those changes however, it can really performs well down to VLF. If you wish to learn more about this nice receiver or if you feel ready to perform some mods by yourself, see the ICOM R75 Yahoo group.

My portable Grunding receiver (actually a Tecsun DR-910). A gift from the Grunding/Eton stand at The Source annual convention in Toronto years ago when buying general electronics was part of my duties. I used this radio only a couple of times.

Normally used as a "kitchen" receiver mainly for FM listening, this Realistic DX-392 (Sangean ATS-818CS) could be used even as a back up MWDX receiver. I did that when my R75 was sent to Kiwa. With the Beverage and preamp connected at it, I did hear on mediumwave Croatia, France, Spain and a few North African countries. Even regular longwave as Radio France Inter and Europe 1 checked in. But disconnecting the external preamp, it became almost silent. There is a wide/narrow filter switch which is useless as the selectivity remains almost unchanged. This radio has been a die-hard receiver with more than ten years of daily service under the belt but unfortunately, it stopped working in 2014. Faulty audio capacitors appears to be the the cause. 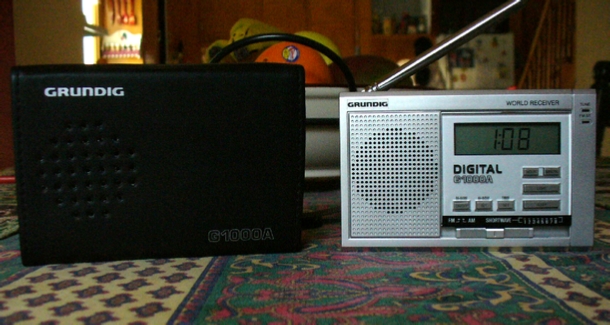 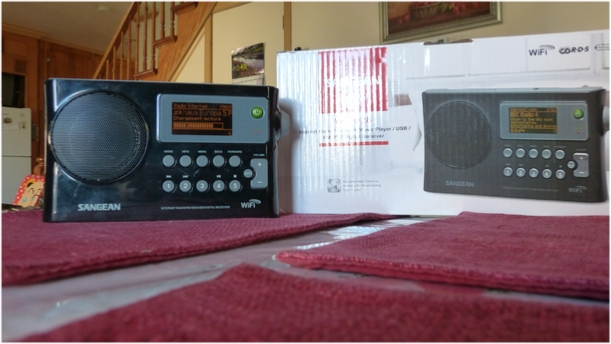 Adquired in 2014, my “not-so-conventional” Sangean WFR-28 portable Wi-Fi radio is a remarkable piece of equipment for its price with a great sound as a bonus. It links with the Vtuner Internet Radio database, it can also connect to your domestic network playing music from your computer, it has an FM stereo tuner with RDS plus a USB port which can be used to play MP3 files. Apps are available for smartphone or tablet for remote control. It can be fully portable by using 4 D rechargeable batteries along with its built-in charger. I simply love it! 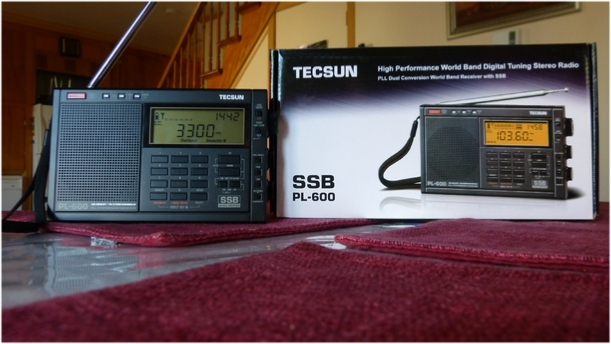 Finally, a 2015 acquisition: The Tecsun PL-600 portable multiband radio. To tell the truth, this small radio impresses me, especially considering its price tag at $59 USD! It came in a clean packaging that includes a nice pouch, external antenna, a spare whip antenna, AC adapter/charger and 4 AA NIMH rechargeable batteries. It covers LW, MW, SW and FM. It can tune 9 or 10 KHz steps for MW. Besides that, it can store up to 600 stations and has timer capability. A small drawback if there is, MW covers up to 1620 KHz, which correspond to the mediumwave upper limit of the 9 KHz scheme. In the Americas, stations in the x-band can be found up to 1700 Khz. In any case, I will make it my first choice as a travelling radio. 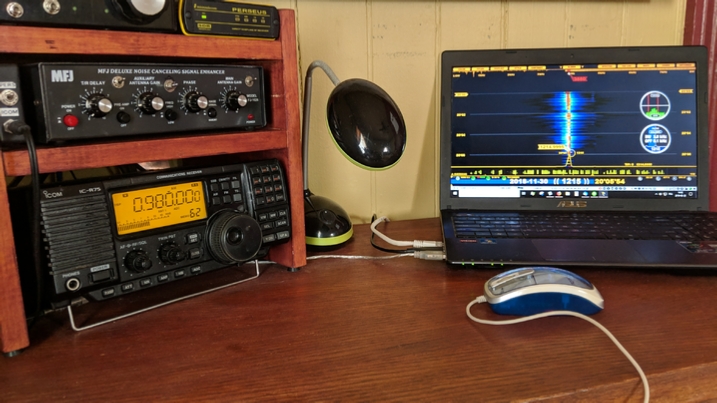