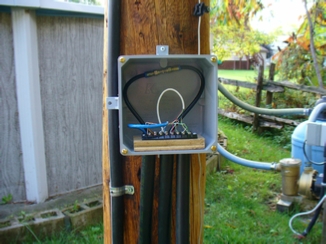 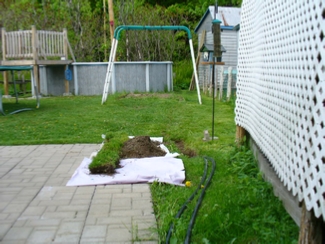 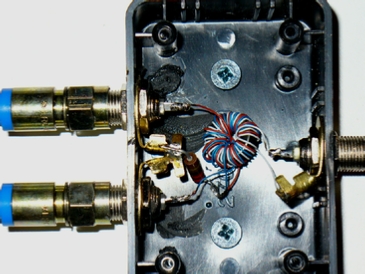 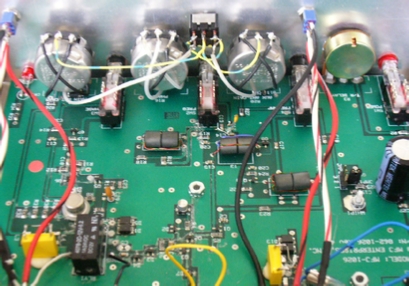 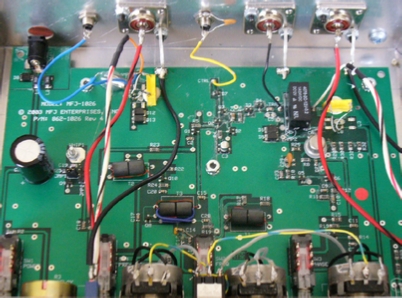 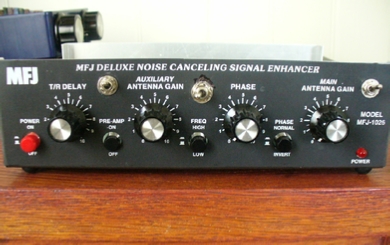 This is where the tubes arrive at the post. The first on the left side that goes up contain the two main lines for the Beverages and long wires. The second and third tube ends in that weatherproof plastic box there with K9AY line and control cable. From this point, there's a third tube going underground up to the K9AY (now dismantled) and finally at far right, a short tube was left for future use.

The feedpoint stands at that big post behind the swimming pool.  There are two underground 3/4 inch plastic water tubing containing each one two cables. One with two RG6 coax cables and the other with one RG6 cable and one Ethernet 8 conductor cable for remote control purpose. This was a nasty job first burying and then, leaving everything clean after digging and filling back. From that same post, there's another underground cable run for around 8m (30ft) to the (former) K9AY antenna back into the  bushes

The first thing you must know when purchasing the MFJ-1025 or 1026 phaser is if you are planning using it for MW DXing, you must perform a couple of simple mods. As for the LW frequency range, it can go down to 150 KHz. Bellow that, signal is attenuated a bit. As described by Mark Connelly on Hard-Core DX, you must first remove the high-pass filter in order to allow frequencies bellow 1.8 MHz to get through without attenuation. The addition of a switch to swap inputs has been quite beneficial to enhance phase shift and get the best nulls. Personally, I also added a switch for each input allowing me to connect them to ground when I'm not DXing. After all, this is the last stage of my receiving station before the receiver. It adds a certain protection. You can find here, on Mark Connelly’s web page, the unit schematic with notes about the modifications.

Another important detail you must know based on my personal experience and others too is that the potentiometers that MFJ puts in their product are really cheap stuff. After just a couple of  months of use, the phase pot began to fail. My first reaction was to send to MFJ an email describing my situation and explaining that I could not send them under warranty because I did some mods on it. Anyhow, that problem has nothing to do with the mods and it would be kind from their part to send a new pot that I could replace myself. This is what they kindly did. After the new pot was installed, an input gain pot began to fail as well and even the new phase pot began to show weaknesses again! I then decided to replace them all with quality parts. I then ordered from Newark Canada three Honeywell Clarostat RV4 series potentiometers. They happen to fit perfectly to the 1026 chassis. To achieve the mod, you’ll need two RV4NAYSD251A for the gain controls and one RV4NAYSD102A for the phase control. They are even smoother than the original MFJ part and I can tell you that my modified phaser really gets the job done and this, year after year. See the Clarostat product datasheet here.

View of the high-pass filters modification

Front view of the unit with extra switches

Internal view of one of my three splitters. I used the design described by the late John Bryant and Bill Bowers in this article. I made them from plastic small boxes for their availability and low price. At the beginning, I've left the primary and secondary windings isolated but after my lightning event , I had to connect them to a common ground to respect the grounding scheme. After that mod, I didn't notice any difference on the reception.

First, when I bought this preamp, I thought in using it near my K9AY loop in a weatherproof  box to increase its overall gain. Then, when I elected to work mainly with the Beverages, I decided to keep it near my receiver and I can tell you that it will stay there. It all situations, the internal preamps of  either the R75 or the Perseus don't match with the performance of the late DX Engineering RPA-1. It is another great design by Tom Rauch, W8JI. It really helps in digging weak signals from longwave up to the shortwave bands. Listen to this file. This is a recording of longwave 162, France Inter with the Perseus. At second sixteen, the RPA-1 is engaged. That tells you why I'm really delighted with it and for those who are thinking that adding a preamp is just raising the noise level, you should fall off your chair! ** 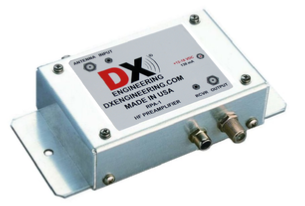 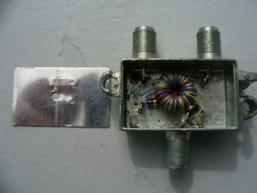 I've added a new splitter to feed both  Icom and  Perseus receivers. I had a Radio Shack TV splitter in my junk box. After pulling out the original transformer, I just replaced it with the HF transformer as described above. Just another ready-to-go splitter for less than $5.00 CDN!

**Please, see the Noise page for an important update related to the RPA-1

THE PC  I'm using at my receiving station has been updated in 2020 for a Dell w an Intel I5 powered by Windows 10 and 10 GB of RAM.  That is more than enough for King Perseus but near limit for the SDRPlay when capturing FMDX at a 9 MHz sample rate. Besides Jaguar Pro for MWDX, I'm using the freeware Audacity to record and edit some of the MP3 clips. French version of defunct software WebPlus  (version X8) is still used to create this website. My actual digital camera is a Panasonic Lumix DMC-FZ150 and I also use my Samsung Galaxy S21 smartphone. (Nov 2021)