After a change of ownership at my neighbour’s property in 2012, I was forced to remove my K9AY from the land next to my backyard. But luckily, the new owner allowed me to extend my existing underground feedline in order to cross completely her property and reach the hill where my Beverages are running freely. With the new underground extension, the feedline has now a total length of 50 meters and stops right at the foot of the hill located behind. Due to the steepness of the ground and the forest density, it isn’t possible to erect anything that needs space like K9AY or EWE antennas for instance.  This is where the idea of trying the notorious pa0rdt Mini-Whip came to my mind. Needless to mention that I was a bit sceptical about this very small whip performance. It is hard to think some other way when your main antennas are Beverages. 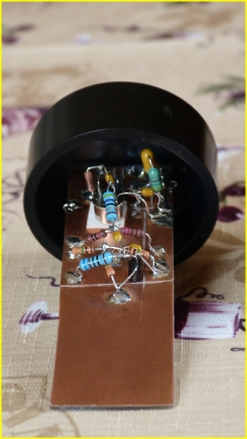 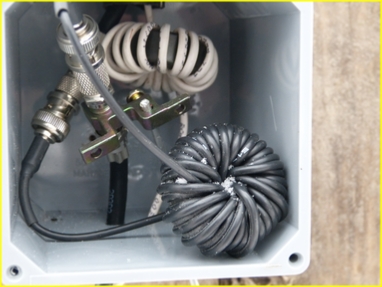 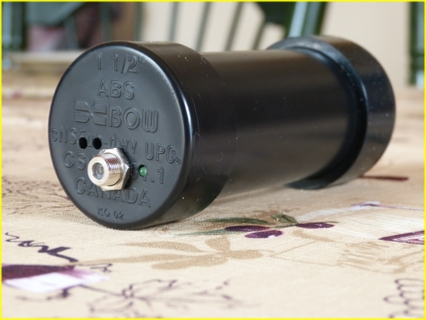 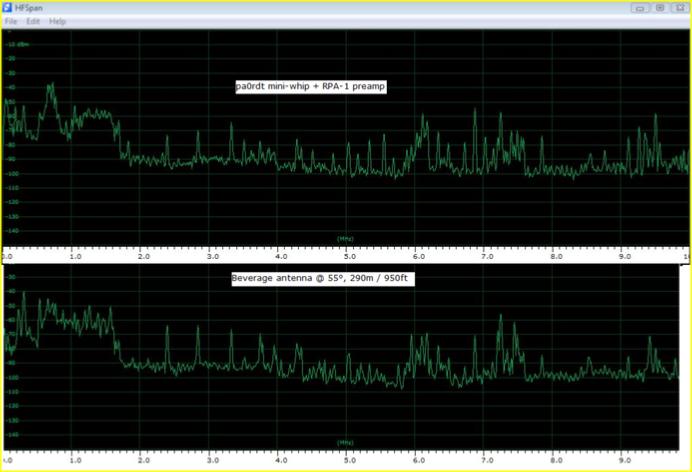 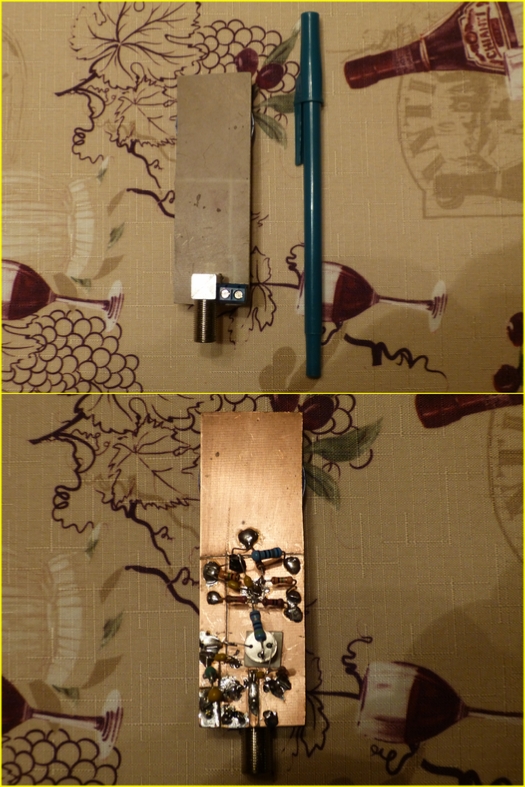 Top and bottom view of the main board / antenna. Additionally to my coax feedline that reaches the base of the antenna, I also have a 4 wires telephone cable that I’m using to bring in the DC voltage, going against (not by far) the original design that uses the coax itself to carry the DC feed. Looking at the above picture, the antenna section of the circuit is located on the upper part of the PC board. No kidding! How seriously this tiny surface can compete with a 300m Beverage ?

The whip is mounted on an ABS 1½ X 6 inches tubing. I’ve added a LED power indicator which is always practical when troubleshooting a failure on the system. As for the two small holes on the connector cap, this is where the DC connects. The two wires each attach to a screw connector. The access to the screw heads is located on the side of the cap through two additional holes.

This weatherproof plastic box is located at the base of a 4 meters high wooden mast and this is where both feedline and supply voltage cable are being choked. The feedline coax braid connects to ground right after the choke via a 1.7 meter copper plated rod.

Now, into the comparisons... 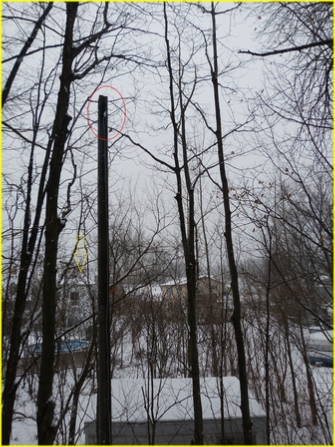 A view of the mast where the mini-whip is mounted (see the red circle). Its location is about 50 meters away from my home (pointed with a yellow arrow). The closest electrical connection is located next to the swimming pool on the bottom left of the picture. The small garage right behind the base of the mast doesn’t have electrical supply.

As previously mentioned, I was sceptical about the mini-whip performance given the fact that I’ve been used to work with long Beverages for years. Nevertheless, with some little help of the RPA-1 preamplifier, Roelof Bakker’s pa0rdt mini-whip managed however to bring some decent competition to one of my Beverages as shown on the above screen capture, using HFSpan on a 0-10 MHz scale.

Now, for Trans-Atlantic mediumwave DX which is my main interest, signals are hardly showing up on the whip with no surprise given my inland location. One thing I noticed and which I can’t explain until now is that peak around 700 KHz coming from the whip, which happen to be a notable rise of the noise floor over that specific portion of the spectrum.

Overall, the performance of the pa0rdt mini-whip is somewhat remarkable for its size and furthermore, with a very low noise floor but it is obvious to me that it wouldn’t replace a Beverage antenna by any means.

If you which to learn about the details of this intriguing achievement, see Roelof Bakker explanatory document of his active mini-whip and find here the schematic of the antenna. Needless to mention that both mentioned documents are already largely published over the Internet.