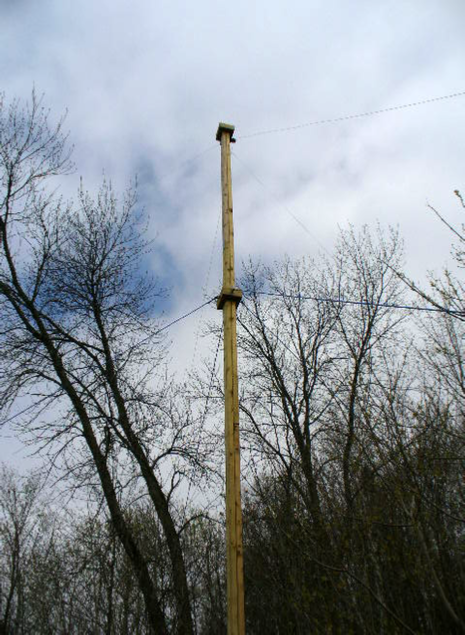 When I thought about building a K9AY loop antenna, I was thinking of a nice complement to the Beverages. I was also hoping that I could use it for phasing purpose against my wire antennas and that it could be a nice performer for Latin America notably. I soon discovered that the overall gain wasn't as high as the Beverages making it almost useless for phasing and the performance for DXing was lower that I've expected. I was really wondering why this antenna was so praised? After all this work, I wouldn't throw in the towel. I began re-working first on the matching transformer with various designs, turn ratios, etc... After a lot of walking between the antenna and my receiving station comparing daytime groundwave levels from my local 230 KHz Quebec City NDB, some MW stations and up to Ottawa CHU at 3330 KHz. I found that there was no dramatic change from one design to another. After a few post on the K9AY group about comparing a Beverage with the K9AY, I understood that I wouldn't get the same result even when connected to a preamplifier. When  we were hit by a nearby strike (see lightning protection page), the vactrol went down along with the balun.

From that moment, even after re-winding the transformer, changing the vactrol, the performance was even worst than before. With the arrival of the 2007-2008 Winter season, I left it unchanged. Finally in September of 2008, I could complete an improved design using exclusively pure DC instead of the half-wave rectified average DC as suggested by the original Gary Breed design. When varying vactrol with the first version, I was experiencing hum problems. Fortunately with the new version, this problem went away. I was now hoping to get back to an acceptable performance at least, as it was at the beginning. Well, I can't say it was a great success. The antenna was working as it should be switching directions, etc... But the overall gain was still disappointing. Now I understand that when you're used to work with long Beverages, you live with high expectations. Nevertheless,  I may still use it at least for tropical bands. I remember having pulled on a few occasions longwave Iceland on 189 Khz and Australia, ABC outlets on 120m band, which is not too bad everything well-considered... Listen to this file with the new controller version, flipping between Philadelphia PA WIP and former New Carlisle QC CHNC with both stations at 610 Khz. 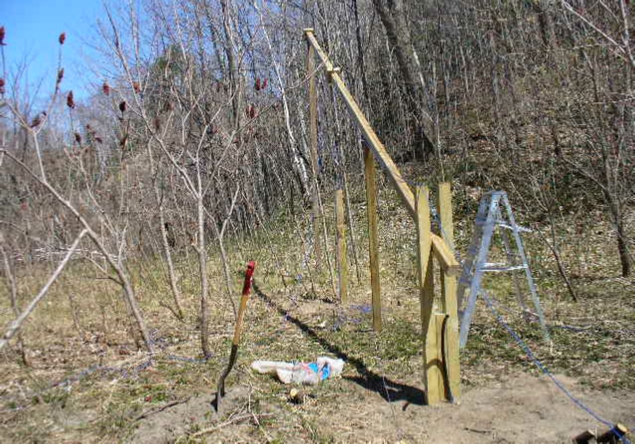 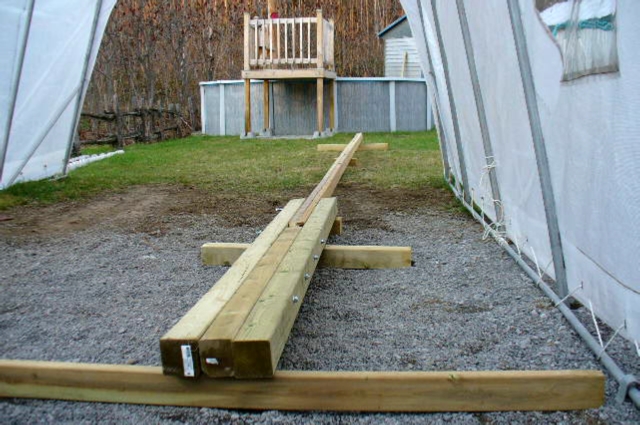 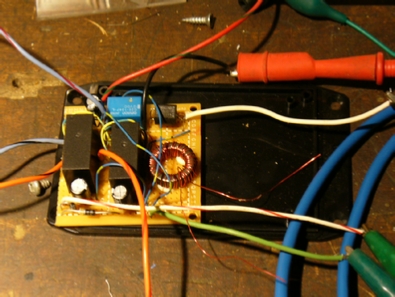 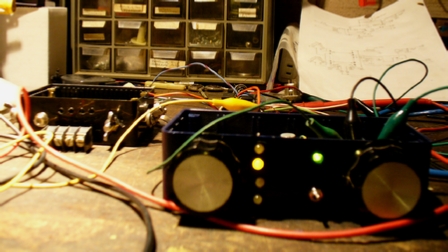 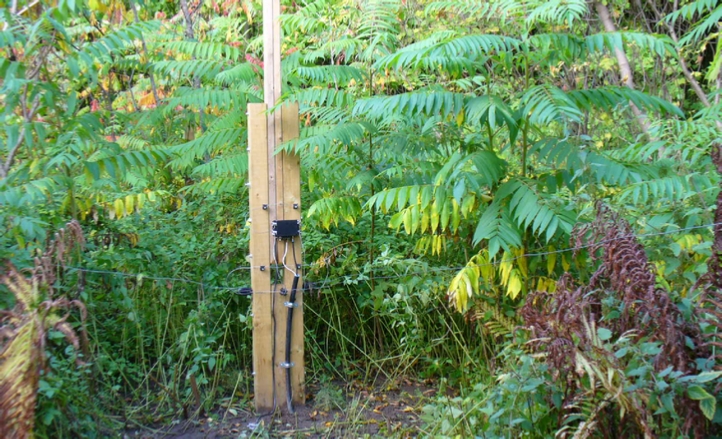 Mast ready to be risen. I don't use concrete to secure poles into ground. I prefer using a mix of fine stone that I'm compacting in the hole around the post. With soil frost and defrost cycles , it stays very firm and it is easier to work with than concrete

At least a Summer shot of my installations! With remote switching box installed at the base of the mast and all the loop wires, control and coax line connected 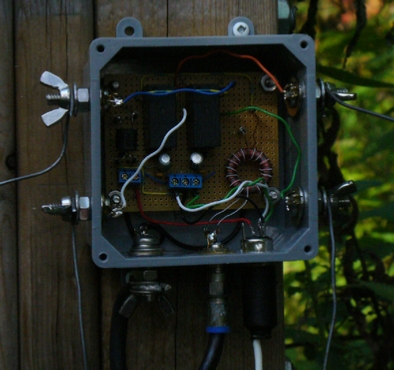 New 2008 version of the relay control box. The weatherproof enclosure came from Home Depot. I was glad to discover this product instead of using the classic black plastic box 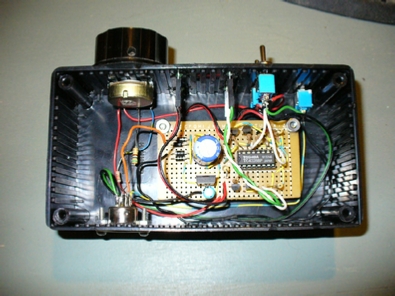 Inside view of the indoor control box version two

The switching part of the circuit is based on the Gary Breed original design. However, improvements have been made since. As I already wrote, pure DC is used instead of half-wave rectified DC to drive the relays. In my case, it fixed the hum problem that I was hearing  when nulling or peaking stations. I took the George Maroti design (see file section of the K9AY Yahoo group) and added a simple circuit to drive LEDs letting you know which direction is favoured. After making the whole circuit work, I realized that I could have SPDT directions switches replaced by two momentary push-button switches for up or down selection. I would have used a BCD counter to drive the actual binary-decimal converter. Furthermore, I would have liked to have the vactrol protected when the antenna is not in use by adding an extra relay that would have got the vactrol resistor shortened for instance, but for this purpose, I would have needed an extra conductor. I am limited to a four conductor wire. Anyway, that is not a big issue because during summertime when there is more lightning threat, the relay box is kept inside disconnected and away from danger leaving the antenna at rest. If you wish to see my whole detailed circuit, look here (PDF). I also want to add here, courtesy of Harold E.Kennedy (N4GG) a fabulous Power Point document about his K9AY. His web site URL was posted on the K9AY Yahoo group.

After a major inspection of my cables and doing some experiments in order to fix a noise problem, I discovered a faulty 30cm piece of cable in shack, between the preamp and phaser main antenna input (see Noise page). For months, I had to engage the preamp to get good results even when using my Beverage antennas. Thanks to some fellow DXers and amateurs who pointed out this anomaly by explaining to me that with a normal s/n ratio, it shouldn't be necessary to use a preamp. With a healthy set up, signal should be good whatever the preamp is engaged or not.  Now guess what? Fixing this problem brought my K9AY to life!! I had from that moment a stronger signal (although not as strong as my Beverages but this is normal) with a lower noise floor than my wire antennas. In the case of the K9AY, the preamp does indeed give a small boost. I'm very happy to finally get benefit from this great toy. Even Trans-Atlantic signals on MW are now showing up. Listen to former DR Radio from Denmark on 1062 KHz and note how the IBOC hiss probably from WTIC is being nulled by using the vactrol.

See the original design by Gary Breed, K9AY. I've  added in my version a separate control cable instead of  sending via the coaxial cable and I'm controlling the termination through a VTL5C4 vactrol. The purpose of varying termination resistance is to optimize the front-to-back pattern. You can find several versions of this antenna on the Hard-Core Dx website. You can also visit the K9AY Yahoo Group.

This K9AY antenna page is now being left as a reference because during the Fall of 2012, a change of ownership occurred at my neighbour’s property where my antenna was located and it had to be dismantled. Fortunately however, the new owner allowed me to leave and even extend my underground feedline just passed the limit of her land, reaching to foot of that steep hill we have behind. I then recycled a part of the mast for a new experiment, a pa0rdt Mini-Whip. See my dedicated page for details. 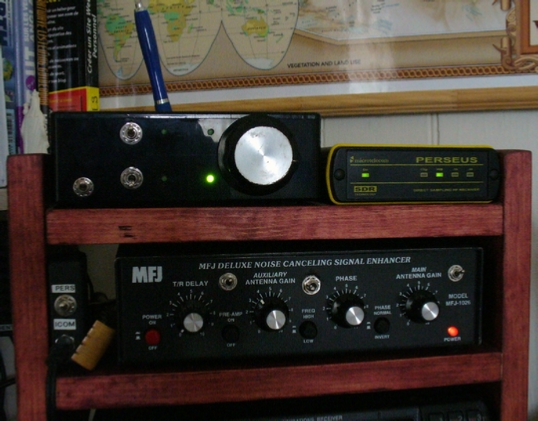