BTW for those who worry about the complete lack of 2019 logs, well in my humble opinion, it is a combination of lacklustre FM ESkip propagation and bad luck for not being DXing at the right time, thus as you can notice, I have nothing at all to report for the entire 2019 season.

On the other hand, I had more success during the 2020 season compared to the previous one. Actually, besides my full time job, I’ve managed to be witness of two major events.  The dynamic maps bellow were created using Google My Maps (a Google account is needed) and originally powered by FMLIST. 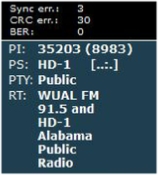 The next clip features Florida’s:

From the Carolinas’ opening, Just a very few worthy recordings in this next clip; there featuring:

As described above, I’ve been witness of two major events so far this season. The first was modest I’d say, with stations mainly from the Carolines and Virginia.

In contrast, the second event on father’s day has been quite buzzing, this time with a large number of stations from Florida. Nothing from the Keys however, nor from the Caribbean. WUAL has been quite steady, here at your left with RDS info locked in. Listen HERE how it sounded.

Additionally, a more detailed spreadsheet version of my 2020 FM ES logs is available here (.xls) where you can find the up-to-date FM ES log list for this ongoing season. This was also powered by FMLIST

The above dynamic map is showing the area of the Carolinas’ opening with most stations coming from NC and SC, along with a couple from VA and GA.

The above dynamic map is showing Father’s day massive Florida’s opening with a couple of AL, MS and GA along the way, all heard earlier that same day

… AND A FEW TROPO LOGS

Update RequiredTo play the media you will need to either update your browser to a recent version or update your Flash plugin.

Except for some New England stations and the Montreal area enhancement, I usually don’t have much success when it come to Tropospheric Ducting propagation (Tropo). Although on that Summer of 2020, I managed to hear Ontario, which was a first as a province with a couple of 400+ km catches. Note that I didn’t took account logs from the Quebec province as most of the stations generally heard are coming from the Eastern Townships and the Montreal area, which doesn’t worth mention in my view.

Additionally, another more detailed spreadsheet version of some of my 2020 FM TROPO logs is available here (.xls) where you can find the up-to-date FM TROPO log list for this ongoing season. This was also powered by FMLIST.