It is never too late for learning they say... Indeed, after a few members of the Perseus YG reacted to a post I published about a DX Engineering RPA-1 preamp’s demo wav file, I was left intrigued. Actually, what was happening was when the preamp was engaged, it was contributing in lowering the noise floor while the desired signal was enhanced by a significant margin, thus resulting in a much improved S/N ratio. At that time, I was convinced that the RPA-1 was just doing an exceptional job. However, with all that chat on the forum around the theme, I began to have serious doubts about my setup as it was.

Then, the key message (#4966) came from Bill W4ZV in response to the following (beginning of quoted text):

>>What *is* interesting is that the noise drops while the signals increases, like magic....A >>"normal" amplifier can not see any difference between wanted signals and un-wanted ones!

>I suspect the problem here is common mode noise being fed to the Perseus but being >rejected at the RPA-1. Knowing how fanatical W8JI (RPA-1's designer) is about common mode >noise, I suspect he has an isolation transformer on the input to the RPA-1 which is shunting >the noise. I can't say for sure because there is no published schematic and the photo on DX >Engineering's website is too small, but that's my guess. (end of quoted text).

Yes, common mode noise rejected by the RPA-1... Just presuming of course. Afterwards, I first agreed to follow German DXer Jürgen Bartels’ advice to use a feedline choke in order to clear the noise source from my system and get back to a decent behaviour. The use of a choke seemed to be a fast and easy way to achieve this. 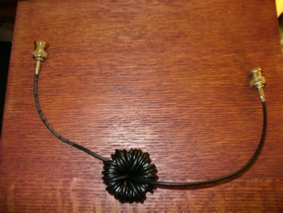 This is the choke

preliminary testing. I made it accordingly to Jürgen’s design by using a FT140-77 core and I winded  as many turn as possible of  RG174 and I’ve put a BNC connector at each end

While I was in quest of the optimal in-shack location for the choke, I found that when it was inserted between the preamp and the phaser, there was a huge change on the noise floor. Actually, it was dropping a lot. I also observed that engaging the preamp was making both noise floor and signal to rise equally as it should normally be. Bingo I said to me. Now I'm getting a much better S/N ratio out of my system. Nevertheless, the noise was still a little high and I knew that I had to pursue in that direction conducing further testing.

The next morning, I was horrified to find that even with the choke in place, the bad behaviour went back again in force so in a desperate move, I  began moving the cables around the choke and I saw that the noise was flipping back and forth. So, this definitely had to be something around there. First, I thought of a faulty PL259 socket on the MFJ phaser chassis but even after it was replaced, the problem was still there. Finally, only a 30cm piece of cable that connects between the RPA-1 and the MFJ-1026 was left to be responsible.

And indeed, THAT was the problem. After having replaced the cable, the S/N ratio went back to a normal state.

An apparently harmless cable causing all that trouble! There must have been a fault in my coax preparation or an hidden imperfection when the cable was manufactured. One thing for sure is that I couldn't find anything unusual after doing a visual inspection around both connector areas. 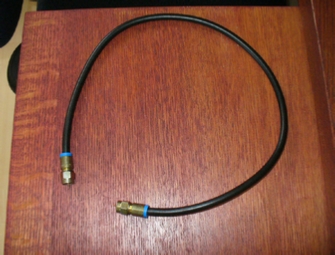 Then with this problem fixed, the time came to begin “playing” with the chokes. As the noise floor was still a little high, there was still some room left for improvements. So, I decided to start my testing from feedpoint and later compare when connected in-shack. So, I first brought my laptop and Perseus outside right at feedpoint and I connected the receiver using a one metre cable to the matching transformer. This way, no long feedline was involved in the measurement. A 470 ohm resistor was acting as a dummy load to ground instead of the regular 950 ft Beverage. The two Perseus shots bellow are showing the effect of the choke. 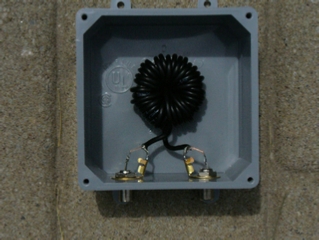 The choke itself mounted in a waterproof ABS plastic cabinet It literally connects through the feedline next to feedpoint. One leg of the matching transformer coax side has to be grounded for the choke to be efficient. Connectors are simple F female chassis mount. Hot glue has been used to tie the choke to the box. 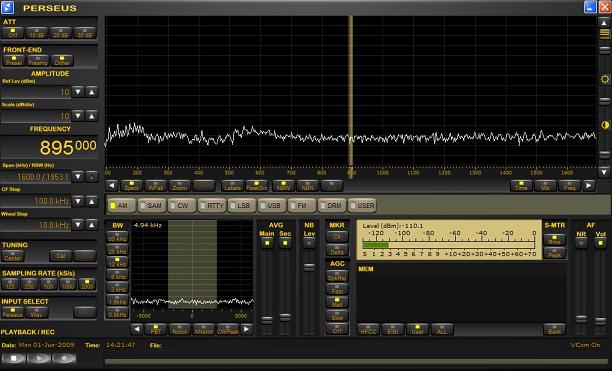 This without the choke inserted, noise floor @ 895 KHz  was at -110dBm. Note higher noise peaks around 200 and 600 KHz. This noise was probably generated from the laptop and picked up by the short feedline 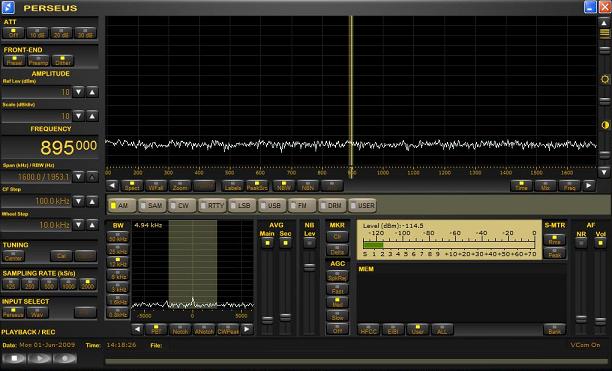 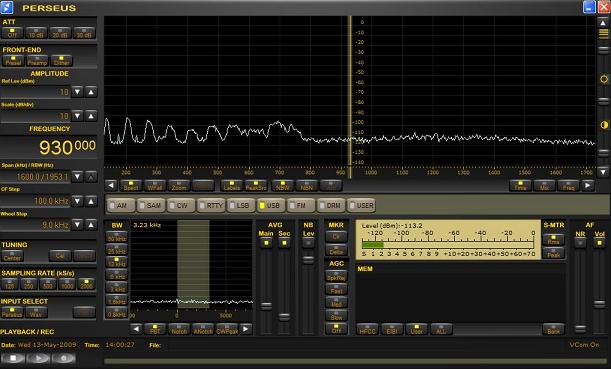 Here’s a screenshot with the faulty short cable connected. Both in-shack’s antenna switchers were disengaged, hooking by default a 75 ohms dummy load to both preamp and phaser in this bypass position. The noise bellow 750 KHz was induced by the external HDD switching power supply. Note that @ 930 KHz, the reading is -113dBm. Not shown here but with the faulty cable replaced, the power supply noise disappeared by magic and the noise floor was kept flat at a near -118dBm between 100 and 1700 KHz. I presume that engaging the RPA-1 with the defective cable would have reduced that noise this time by blocking common noise as stated by W4ZV. A test I didn't made though.

So, -114dBm with a dummy load and receiver directly at feedpoint. Now, see bellow with choke and the beverage connected. At 895 KHz, s-meter (not shown) was showing -94dBm hence it makes me assume that the antenna and/or location are/is indeed a little bit noisy.

Now, what I  have left in order to get the noise even lower is moving the feedpoint farther which is out of question. Don't expect me to make another trench into the forest and get the feedline buried that far. However, I still have that MFJ-1026 phaser along with at least a second Beverage which can be useful in getting rid of the extra noise. Watch this short video showing how a probable nearby light dimmer is interfering over the longwave range. For the purpose, I tuned a reliable TA LW: Morocco 171. Then observe what is happening when the phaser is engaged. Impressive isn't it?

Initially, this phaser was used to null out adjacent or very close MW stations helping out revealing weaker TA. But frankly, I rarely thought in using it to simply cancel the noise. My only concern is during a Perseus wideband recording. I doubt it could deliver flat and stable results all over both LW and MW bands. Some stations could be altered and other noise sources could remain present. Anyhow, this should probably be the best to be done for now.

I really want to thanks Jürgen Bartels for his great availability in this quest and also Leif Asbrink SM5BSZ for taking the time to analyze some of my wav files.

I've been triggered after numerous comments on the Perseus YG about the "miraculous" effect of the RPA-1 in cutting the noise while giving back the signal strength I should already have had. As I've stated, fixing this problem brought back to life my K9AY and also revealed the usefulness of my MFJ phaser (modified) down to 100 KHz in which I had given up in the past.

At the time the chokes were inserted, I went using a single large common ground connection for both Beverages’ matching transformers, the feedpoint’s remote control gear and chokes. Since I’ve been plagued with some buzz noise especially in the LF-VLF range after the above article was written, I’ve ended putting a dedicated ground rod for each of the feedpoint components, five in total. Even if they aren’t much spaced between each others, the final result was positive nevertheless with the noise going down significantly. Afterwards, I also made an extensive “connector tightening operation” all around my system which resulted to be quite beneficial in cutting down the noise.

Click on the image  to play in-shack choke demo

Furthermore, it also made a noticeable change in the Beverages directivity which is always good news. Encouraged by the results, I decided to put two more chokes, in-shack this time and see what happen. Fortunately, the result was positive again. I made the same attempt in the past but for some reasons, I didn’t succeeded. Maybe I was just looking for results on MW where the difference is far less noticeable, I don’t recall exactly. See the short video showing the difference once the in-shack choke inserted over a portion of the VLF band. 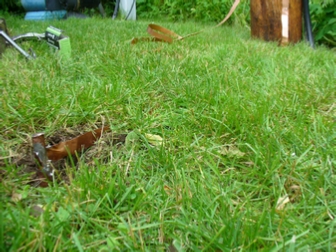 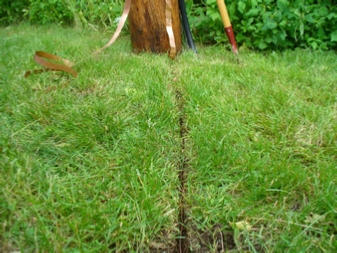 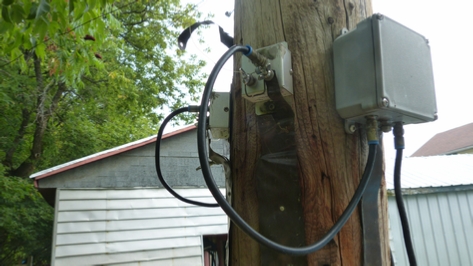 A view on one of the two choke enclosures next to feedpoint. Copper foil is my prime choice for ground connection as it provides a low impedance path to earth which is not bad against lightning and it also help to keep the noise away. On the two above pictures, you can see the base of the post that is used to hang our clothesline and this is also where all the wire antennas converge. The ground system consist in a total of five, 5/8 inch copper plated ground rods, each with a five foot length.

Three of those stands right at the base of the post This is where the feedpoints’ baluns and the remote antenna switcher (not visible here) connects. What is shown on the upper pictures are the other two remaining rods, entirely buried and away from the post, on which I welded the copper ribbon coming down from the choke box and through a trench into the soil.

Buried ground rod with the copper ribbon welded to it

Page  revised and updated in Nov 2017