Many of the following MP3 files are labelled with station details, UTC time and date of recording. Please make sure that your player is set to show this information.  Also note that several stations listed bellow may have left the air since (sadly, quite a few of those are from Venezuela).

ARGENTINA, LS9 Radio Continental at 590 KHz from Buenos Aires with a quite descent signal caught in July 2012 during a solar storm. ID at 1:03 “...Está escuchando Radio Continental AM 590 en todo el país”. This was my first ever Argentinean.

BONAIRE (Caribbean Netherlands), Trans World Radio relay on 800 KHz with full ID in Spanish Radio Trans Mundial (Dec 2014). This is a frequent guest when auroral conditions prevail - Here’s now a clip from Nov 2021. Since the revamping of the site, I have the impression that I don’t hear them as often as I used to hear them before. A change in their radiation pattern perhaps ? NEW.

BRAZIL, Rádio Globo ZYK694 at 1100 KHz from São Paulo. I had to work with the phaser first to wipe out WTAM, Cleveland OH. Then, Radio Globo just came out of nowhere with a soccer play by play. Mentions of "Globo" where heard at sec.5 and sec.42 including the score 1-0 in favor of São Paulo. Thanks to Neil Kazaros and Chuck Hutton for their help. My first ever MW Brazilian -

Here’s a better shot from July 19th 2011 again after phasing out WTAM and enjoying better conditions along with a full ID! Distance is 8200 Km.

BRAZIL, Rádio Globo ZYJ458 on 1220 KHz from Rio de Janeiro with a couple of "Globo" Ids - Here's another very nice reception and furthermore, this one - This station is the easiest Brazilian to catch here. Listen to this other example - This can go endlessly. Here’s more from Aug 2017.

BRAZIL, ZYI533 Rádio CBN, Belem at 900 KHz with soccer play-by-play and various CBN Ids. According to Rocco Cotroneo, this is from the Recife feed. Thanks Rocco for ID!

BRAZIL, ZYK695 Rádio CBN, São Paulo at 780 KHz. Same soccer game as the above. Thanks to Rocco Cotroneo for ID.

BRAZIL, ZYH707 Rádio Nacional, Brasília at 980 KHz with more soccer - Now with a phone-in program on another rare appearance. During the Summer of 2014, I also had a great reception of the station at one time with full ID along with frequency lineup, as a bonus.

BRAZIL, According to Rocco, the following at 1150 KHz is most likely to be ZYK656 Rádio Tupi, São Paulo with soccer talk again.

BRAZIL, ZYH586 Rádio Iracema, Fortaleza at 1300 KHz with religious talk in Portuguese in turn with Spanish. Thanks to Rocco Cotroneo, Chuck Hutton and Jean Burnell at RealDX for help.

BRAZIL, ZYJ455 Rádio Tupi in Rio de Janeiro on 1280 KHz. A Summer catch using the phaser to null out Montreal’s CFMB. Thanks again to Rocco Cotroneo for ID.

BRAZIL, ZYH587 Rádio Shalom from Fortaleza on 690 KHz with a very nice ID.

BRAZIL, ZYH588, Rádio Uirapurú from Fortaleza on 760 KHz with the ID at 1:17. Thanks Rocco Cotroneo for confirming my assumption.

BRAZIL, ZYH449 Radio Cultura de Bahía from Salvador on 1140 KHz most likely, Thanks to Rocco Cotroneo and Jim Renfrew at RealDX for their help.

COLOMBIA, HJES RCN Cali at 980 KHz with references at Cali and comments about corridas and toros (bullfights).

COLOMBIA, HJCZ  Radio Recuerdos at 690 KHz from Bogotá with a nice ID.

COLOMBIA, HJAT Caracol Radio at 1100 KHz, Baranquilla. Listen how strong the signal was. Cleveland's WTAM was literally blown away!

COLOMBIA, HJCI Radio Súper on 970 KHz from Bogotá with ID.

CUBA, CMIP 1140 KHz Radio Surco. Sounds a bit different to my ears than other Cubans.

DOMINICAN REPUBLIC, HIVP Radio Olímpica at 970 KHz. Thanks to Jan Alvestad at RealDX for helping ID.

DOMINICAN REPUBLIC, Emisora HIJB on 830 KHz popping up briefly and giving ID towards the end of the clip “… desde Santo Domingo, transmite la estación HIJB” (May 2019). - Here with the announcement of the program Clasicos del Merengue. Tnx to my friends at RealDX for help (Oct 2019).

ECUADOR, HCRC2 - Radio Caravana in Guayaquil at 750 KHz. I have been waiting for a long time to add this country to my total. During a solar disturbance in October of 2012, I finally had my first taste of Ecuador on MW. Radio Caravana is apparently a sport station and the following is a promo of the next game of Ecuador against Venezuela. This was part of the qualification tournament for the FIFA 2014 World Cup where Ecuador was doing very well so far. Now listen to the same promo recorded from their webstream - Here’s another clip with mention of Caravana at sec.4 and “...la hora en Caravana” at sec.21. Thanks to Alessandro Gropazzi at RealDX for backing my thoughts -

*February 2015: At the first view, it wasn’t a great night for Latin DX but fortunately, I came across 750 by chance while Dxiing live and again, I could hear R.Caravana at an interesting level and alone on the frequency - Here minutes later, it popped up through WSB  and Cuba. It was interesting to observe after reviewing  the half hour file that there was no trace of Venezuela at all, which is the most commonly heard LA station on this channel here.

ECUADOR, HCNY2 - Radio Cristal from Guayaquil at 870 KHz. A very nice surprise from late December 2014 where solar disturbance allowed many Colombians to check-in along with this lone Ecuadorian while taking advantage of a Radio Reloj weakness.

ECUADOR, HCRS2 - Radio Sucre Guayaquil on 700 KHz giving full ID during fútbol in Oct 2019 and all alone on the channel. UPDATED.

MEXICO, XEAVR 720 KHz Radio Fórmula in Veracrúz. With ID in the website address.

MEXICO, XEKV 740 Khz, EXA-FM in Villanueva near the Guatemalan border, a nice surprise at our sunrise.

ST-KITTS AND NEVIS, ZIZ Radio at odd frequency 555 KHz. Caribbean music then edited to hear man voice in English talking about 25th anniversary of their independence. They got independent from the UK in 1983.

ST-KITTS AND NEVIS, Voice of Nevis on 860 KHz with amusing sung local ads.

URUGUAY, CW1 Radio Colonia, Colonia del Sacramento on 550 KHz. The accent brought my attention as it really look like the “Cono Sur “ region pronunciation. After filling their contact form and providing an audio file link, I received a week later the e -verification confirming that I’ve heard indeed CW1. That was a nice feeling for sure...

VENEZUELA, YVKS  RCR Caracas at 750 KHz. One of Venezula’s regular.

VENEZUELA, YVKE Radio Mundial at 550 KHz with great ID - Again here in Oct 2019 and pro-government. The station is one of the few AM remaining in Venezuela.

VENEZUELA, YVXM Radio Minuto from Barquisimeto on 790 Khz. A much better clip can be found at my 2015 St-Patrick’s day solar storm audio files page.

VENEZUELA, YVMH Radio Popular from Maracaibo at 700 KHz with the announcement Radio Popular that I couldn’t figure out. Thanks to Chuck Hutton at RealDX for helping. 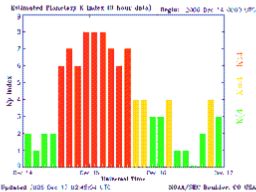 This is how the K index looked around mid-December of 2006. It really peaked on the 15 as shown on this NOAA graph. For two weeks, all three colours were always

mixed: Red, yellow and green resulting in a quite steady

allowing various LA station to show up. At some

Imagine at that time with a Perseus capturing a 1600 KHz

chunk. It certainly would have resulted into many hours of

listening in order to digest it all. Since I'm in medium wave Dxing, this is the strongest aurora I could experience.

At my latitude, it is generally easier to DX Europe and the Middle East than Latin America. Most of LA medium wave stations listed bellow have been heard during similar geo-magnetic disturbances.